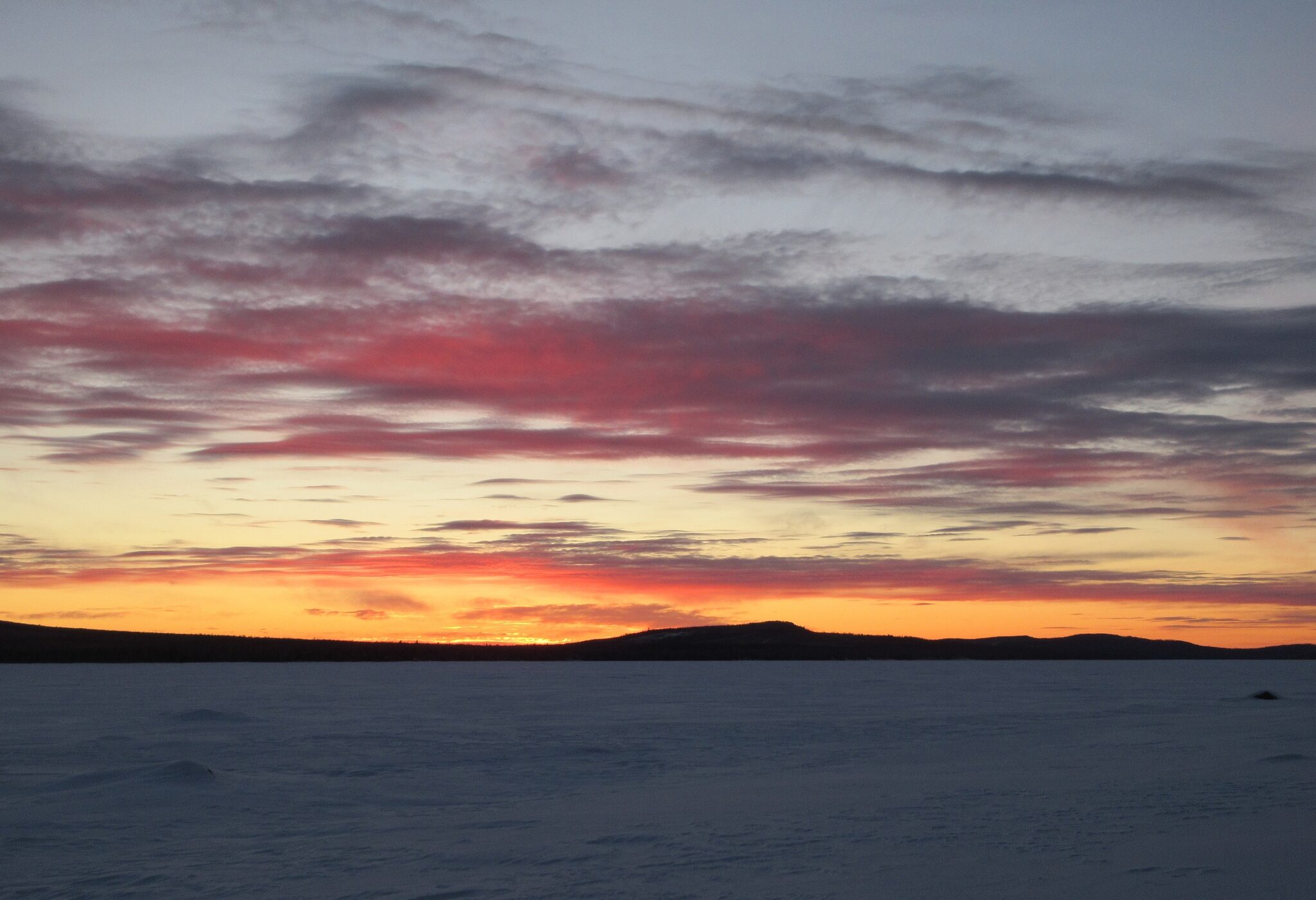 At the end of my last post, I promised to take you, my readers, along on my daily chores. I’ll get to that soon. But let’s wait a bit before we start our work, and go out for a walk instead…

Two days ago, the weather was lovely: sunny, with little wind, and afternoon temperatures that reached into the upper teens. I spent the early part of the day on various indoor tasks that differed little from what I would do if I were in town. There is no place on Earth so remote that we can escape IRS filings and bill paying. Complicating matters, the small generator that powers my satellite dish and laptop was acting a bit fussy. The prolonged cold weather was probably not helping its mood. The thermometer on my porch, where my generator sits, had been below zero for five consecutive mornings. I had to pull out the manual and delve into the mysteries of the choke and throttle. Engines have never been my strong point, and I confess to some trepidation when I need to deal with them.

Around three thirty, I decided it was time to put the remaining items on my list on hold and get outside. I strapped on my snowshoes and set out for a walk around the peninsula where my land is located. (For those of you with a DeLorme Maine atlas, the peninsula separates First Roach Pond from its North Inlet; my cabin is on the First Roach side.) I carried my binoculars; my plan was to check the status of the eagles’ nest I mentioned in my last post (https://www.wendyweiger.com/the-heart-of-winter/). As always, I kept my eyes open for signs of animal activity along the way.

A small maple, not much more than two feet high, caught my eye. It grew in a pattern known as “brooming.” When hungry animals cropped the tips of its branches, collateral branches took over, growing and lengthening past the truncated tip. When those branches, too, were cropped, their own collaterals grew. Over time, the little tree took on a dense, shrubby appearance.

So who had been dining on this little maple? Some of the severed branches were frayed at their ends, suggesting that deer had been feeding. Deer lack upper front teeth, so they pull roughly to get the tip off a branch. Other branches were cut neatly, as though someone had used a pair of scissors. Snowshoe hares likely nipped these branches with their sharp teeth.

The trail to the pine with the eagles’ nest is faint and subtly marked. A neighboring landowner tied small pieces of hard-to-spot blue flagging tape to a few trees along the path, wishing to share the nest with a small group of friends and neighbors, but not wanting to advertise it to the general public. I detoured around a couple of fallen trees, paying close attention to returning to the trail each time I did so. On my last visit, I was more casual, bushwhacking ahead in what I knew was generally the right direction. My care this time paid off. I found the nest pine and continued past it onto the ice over the North Inlet, walking far enough out that I could get a good view through my binoculars of the tree’s top. I realized that, last time, I had veered to the west, ending up at another tall pine just a bit farther down the shore. I lifted my binoculars, and was pleased to see that the nest is still there.

I’ve been watching this nest since 2014, after the neighbor who marked the trail told me it was there. He and his wife were out for a walk in the summer of 2013 and were delighted to stumble upon the nest when an eagle family was in residence. It was empty in 2014, then in 2015, two eagles fledged from the nest. In 2016 and 2017, one eagle fledged each year. I haven’t seen any eagles there since, but I’ll be sure to check back this spring.

I continued walking on the snow-covered ice toward the peninsula’s tip. I had almost reached it when spots of color on the white background attracted my attention.

A male coyote had lifted his leg to urinate on a mound of snow. He had deposited his scat nearby as well. The scat closest to the mound was partially buried, but I found another piece a foot or two away. It was full of small hairs from an animal he had eaten, skin and all.

Coyotes use scat and urine to mark their territory. We’re currently in the midst of coyote mating season, which runs from January to March. At the beginning of March 2011, I heard a nocturnal coyote encounter near my cabin. About forty minutes past midnight, the stillness was broken by high-pitched squealing and lower-pitched barking that lasted a minute or two. A friend with professional expertise thought it could have been a territorial encounter between two males, or a male and female mating.

As I rounded the tip of the peninsula, I found more coyote urine on a slab of ice projecting above the snow.

I have many animal neighbors, though I rarely see them in person. The snow serves as a journal of their comings and goings. Over the course of my walk, I saw the tracks of several other creatures, including a mouse, red squirrel, snowshoe hare, red fox, and a large weasel – my best guess is a fisher, but possibly an otter.

As I walked along the shore of First Roach Pond back to my cabin, a waxing crescent moon gleamed in the western sky, above a band of orange and gold that lingered from the sunset. In the east, Sirius shone brightly. I’ve followed this same route many times in the past, and will probably do so many times in the future. Though the route is the same, each trek is different, offering new discoveries.

Today marks five weeks since I last left the woods to go to town for supplies. I plan to head to Greenville tomorrow. I’ll be packing five weeks of errands into two days, so I may be slow to respond to emails and Facebook comments – but I promise to catch up once I’m back in my cabin.

Although I took this final photo the day before my walk, I can’t resist sharing it now (some of you may already have seen it on Facebook). My shoreline offers wonderful sunset views. But as sunset connoisseurs know, it takes a certain configuration of clouds to produce dramatic colors. No clouds, and the sun simply slips below the horizon. Too many clouds, and the sunset is obscured. I’d been waiting for a while for a really striking sunset, and this one felt like a gift.