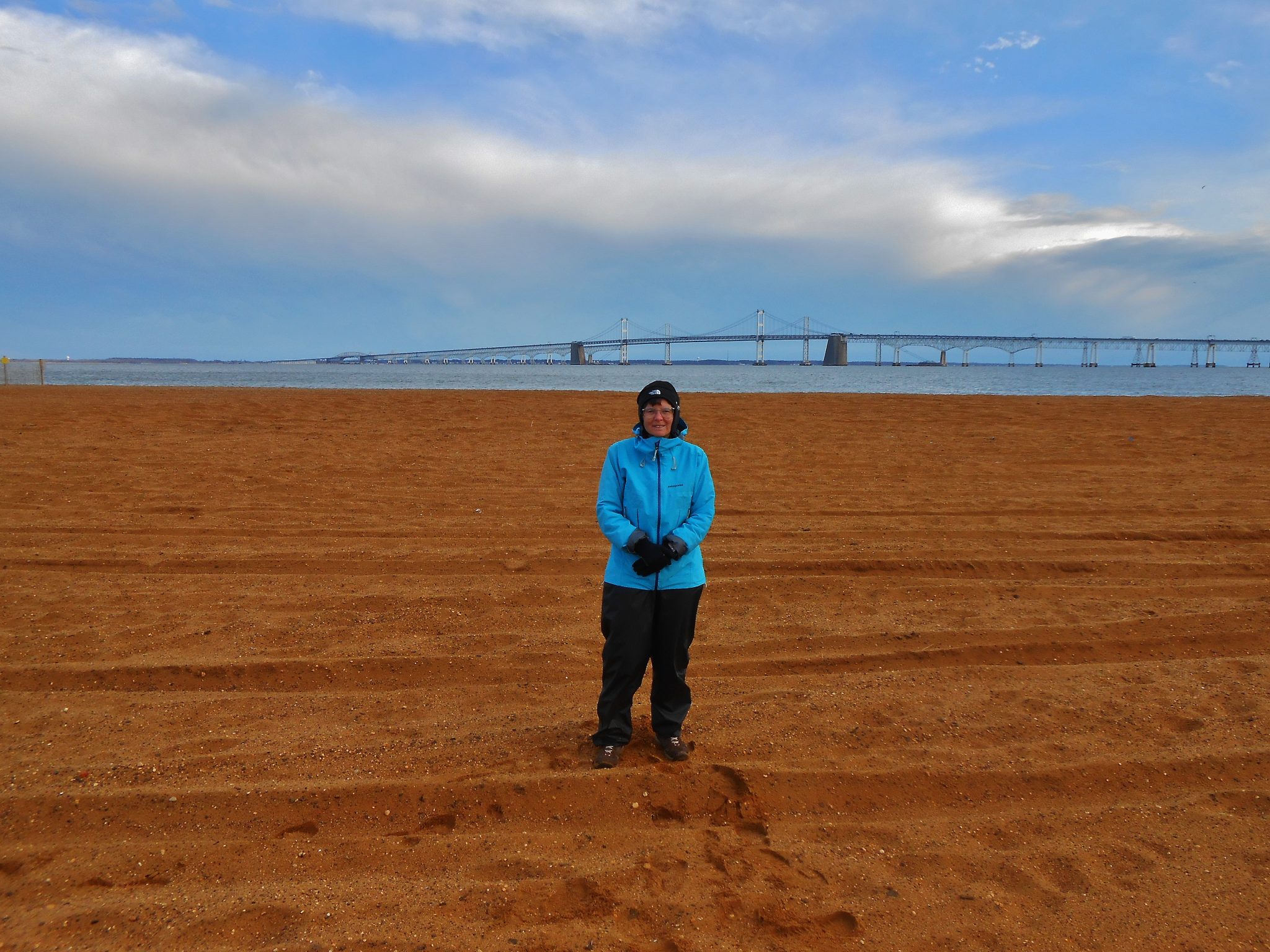 When I wrote my last post a week ago, I was preparing to hike the five miles from Kent Narrows, Maryland to the Chesapeake Bay Bridge, after two days of rest for my road-weary knees. On the morning of Friday March 22, I strapped on my new braces, shouldered my pack, and crossed the Narrows – the channel separating Kent Island, in the Chesapeake Bay, from the mainland. When I paused to look over the bridge railing, I discovered what appeared to be an abstract sculpture emerging from the jade-green water – in reality a group of old pilings of unknown function capped with oxidized metal. But art is in the eye of the beholder…

Once on Kent Island, I followed the Cross Island Trail most of the way to the Bay Bridge. This path parallels very busy roads, offering a safe option for walkers, bikers, and skateboarders. It was a welcome change after days of too-close encounters with passing vehicles on roads designed exclusively for motorized travel. As I suggested in my last post, a nationwide trail network of this sort – providing easy access to outdoor exercise – could go a long way toward alleviating our modern epidemic of illnesses due to sedentary lifestyles.

My knees were still stiff and painful, so I stopped often to rest, allowing me ample time for observation. At one point, I was struck by an almost surreal juxtaposition. To my left was a noisy, busy highway. To my right was a scene that appeared, at a quick glance, to be almost wilderness. A grove of pines stood tall along the shore of a whitecapped cove; graceful golden-brown reeds lined the water’s edge. A group of ducks dove for food – too far away for clear identification (at least at my level of birding ability), but I could see black and white heads that suggested hooded mergansers or buffleheads. The only obvious human footprint was benign: a wooden nesting platform, perhaps for osprey.

And yet I learned later that even this lovely view showed strong evidence of human degradation. The reeds were Phragmites australis, a non-native, invasive species that traveled here in the nineteenth century, hidden in the ballast of ships from Europe and Asia. Phragmites are not a valuable source of nutrition for waterfowl, and when they crowd out native wetland plants, they deprive birds of their food.

As I walked toward the Bay Bridge, one of my Achor Earth Ways board members, George Wiese, was driving down from Maine with his friend, Tabitha Day – a student at Maine’s Unity College, which focuses on environmental studies. They arranged to meet me near the entrance ramp to the bridge, which is off-limits to pedestrians. We drove across and stopped at Sandy Point State Park on the western shore, where a beach grass restoration project is underway.

George, Tabby, and I spent two nights together at a rental cottage near the Severn River, a tidal estuary of the Chesapeake. After checking in and heading to a local seafood restaurant, I was dismayed to find that, even without my heavy pack, I needed my double trekking poles just to hobble from the car to our table. It was clear that two days of rest had not cured my knees, and that the day’s relatively short five miles had compounded the previous stress.

And here I feel I must make a confession. As I was settling in at the cottage, I discovered my reusable Nalgene water bottle was missing from my pack. I was not pleased with myself. I generally make a point of doing a quick survey of my surroundings after every rest stop to be certain I’ve collected all my gear. I believe the pain in my knees and the unaccustomed difficulty of ordinary movements distracted me – but that’s not an excuse. The last time anything like this happened was four years ago, when a fleece shirt loosely attached to my pack was snagged by a tree as I descended a mountain. I went back up the mountain the next day in a rainstorm to retrieve it. In this case, going back was not a practical option; I can only hope someone picked up and repurposed the bottle. This is one of the reasons I pick up other people’s trash: despite my best efforts, I will occasionally slip up and leave something behind.

What would the condition of my knees mean for the rest of my hike? The question was unsettling. I spent Saturday the 23rd resting. I sought solace from nearby nature, walking at a snail’s pace to the shore of the Severn shortly before sunset to enjoy the view. When I returned to the cottage, in a quiet residential neighborhood, I paused outside for several minutes, exploring each of my senses in turn. I felt the softness of the dirt under my boots; the cool breeze against my skin was balanced by the warmth of the sun’s rays. The air in my nostrils was cool, fresh, and dry. The wind sighed overhead; it rustled the leaves of a nearby holly tree and scuttled fallen foliage across the ground. Spring peepers chorused in the distance; a crow called from above. I looked up at blue sky through a lacework of bare branches, some of which still bore the remnants of last year’s seed pods. When I looked ahead, the setting sun dazzled my eyes; when I looked behind, I saw my long evening shadow. With limited mobility, I found that the wildness of a suburban yard could soothe my spirit.

On Sunday the 24th, George and Tabby transported me back to Baltimore, where my longtime friend Marie Bellantoni – who walked the first few steps of the American Discovery Trail with me on March 10 – opened her home to me as if it were my own. I can’t fully express how much this means to me. As someone who has almost no remaining biological family, the kindness of friends in time of need is a lifeline.

Marie arranged a consultation for me with a local emergency physician, who thought rest and anti-inflammatory medication should yield substantial recovery within 10 days to 2 weeks. So I’m off the trail this week, resting in Baltimore. I had planned to spend next week in Washington, DC in any case, and I’ll resume my hike the week after that – using a pushcart to take the load off my back. I’ll never take pain-free mobility for granted again.

As of today, March 28, my knees are showing slow but steady improvement. And so I set out this morning to experience the wilds of Baltimore – which will be the subject of my next post. 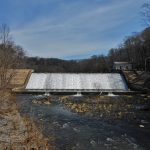