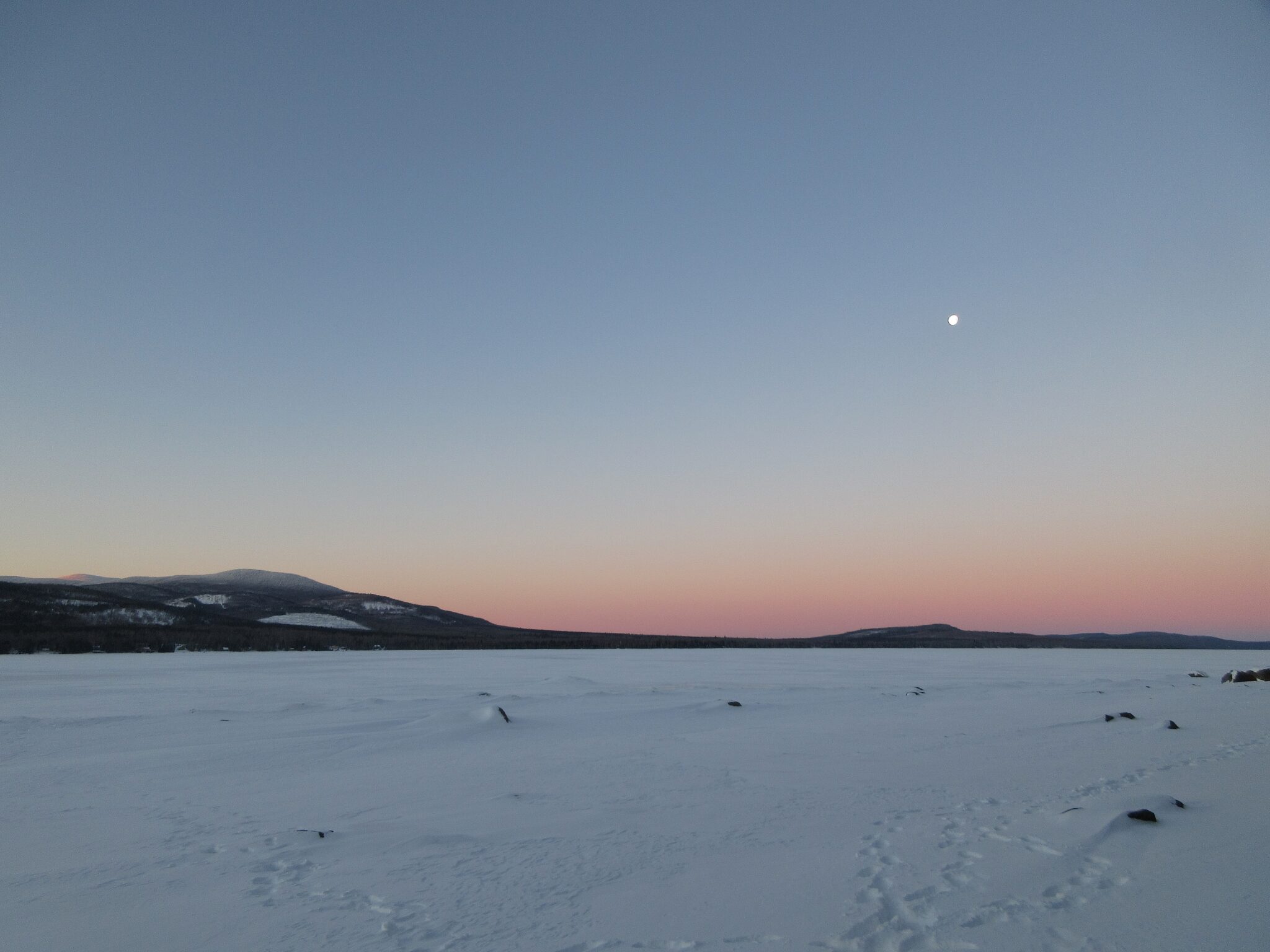 Over the past ten days, I’ve been savoring the wintry weather. Overall, the season has been relatively mild by Maine Woods standards. As of January 28, the temperature on my porch thermometer had not, to the best of my knowledge, dropped to zero Fahrenheit even once.

Our warmer weather this year has meant grayer skies. The coldest days of winter are often dazzlingly lovely. The low moisture content of frigid air translates into skies that are vibrantly blue by day, black and starry by night, with lakes and mountains glistening white beneath.

And so I rejoiced when the weather finally turned colder. On the 29th and 30th, the temperature stayed mostly in the single digits. January 30 was just the kind of day I had longed for, cold and brilliantly sunny.

It was a perfect day to welcome my first visitor of the winter to my cabin. Eddie O’Leary, a videographer whom I met through my work with the Appalachian Trail Conservancy, plans to document some of my experiences here. He was the first fellow human I had seen since my return from town nineteen days earlier. In the afternoon, he filmed me going about various outdoor chores.

After dinner, we walked to the shore of First Roach as the just-past-full moon was rising above the trees, casting silver rays across the snow. A wind blew from the northwest. I’m not good at estimating wind speed. But at the closest National Weather Service station, 16 miles away, it was blowing about fifteen miles per hour, gusting above 20, with resulting wind chill in the range of minus 17 to minus 18 degrees. The moonswept landscape was starkly beautiful and utterly indifferent to our frailty as warm-blooded creatures. I felt peace as I was absorbed into the vastness, but it was good to know we could retreat into the warmth of my cabin whenever we needed.

Back in the cabin, we were cautious with regard to Covid. After 19 days of complete isolation, far from other humans, I was one of the few people on the planet who could honestly claim there was no way I could transmit the virus to anyone. Eddie, who lives in Bangor, is careful with regard to mask-wearing, but random exposure is always possible from office-mates or chance encounters on errands. He had planned to sleep outside in his tent. However, given the temperature, we decided he could pitch it indoors, thinking it would function as a sort of full-body mask.

The next morning, we got up shortly before sunrise. It was minus three on my porch. We returned to the shore, where the moon hung low in the west as the sun rose to the east. The sky was clear and cloudless.

After lunch, Eddie strapped on his snowshoes, hoisted his pack, and set off on the three-and-a-half-mile hike back to his car. The afternoon warmed into the teens, and I went for a leisurely snowshoe around the peninsula where my cabin sits. I checked out a tall pine where eagles raised their young in the past, trying to see if their nest was still there. It’s been unoccupied for the past three summers, but I can’t help hoping a mated pair might take up residence again this year. I’ll have to go back with binoculars. And I found the tracks of what I believe was an otter, in a two-by-two bounding pattern characteristic of the weasel family; they disappeared into a strip of open water at the peninsula’s tip.

I made it back to my own land shortly after sunset, just as the evening’s first star began twinkling above the northwestern horizon. When the sky was inky black, before the moon rose, I made a final trek to the shore for stargazing. The Milky Way arched overhead; the North Star shone at the tail of the Little Dipper. A shooting star flashed across the sky. The temperature was dropping back toward zero and the ice on the pond boomed as it contracted in the growing cold.

On clear winter nights, with no insulating cloud cover, any warmth remaining from daytime sunshine dissipates into the void above and temperatures plummet. I was curious how low my porch thermometer would drop.

I arose just before sunrise the next morning, February first, and eagerly rushed outside to look: minus fourteen. Not a record by any means – the lowest number I’ve seen was minus thirty-eight, just once, twelve years ago – but it was cold enough to make a perfect Maine winter morning. The air was pure and clear. Ice formed in my nostrils as I walked down to the shore. Dry snow squeaked beneath my boots. Trees were cracking with a sound like gunshots, and the ice was rumbling. I was not alone: a pileated woodpecker drummed in preparation for the upcoming mating season, while a raven uttered its guttural croak.

The temperature rose over the course of the day and clouds gathered. I didn’t mourn the loss of sunshine, because I was anticipating a new delight: a nor’easter. The storm was predicted to add close to a foot of snow to the existing base, which remained under a foot, low for the start of February. An unseasonable thaw at Christmas erased all of December’s snowfall, meaning January started with uncharacteristically bare ground.

Those of you who read my first post of the winter (https://www.wendyweiger.com/my-wild-winter-begins/) may recall that my move into the cabin coincided with an early-December nor’easter, which stranded my car on a remote woods road. This time, with my car safely parked along a plowed road three and a half miles away, I planned to hunker down and enjoy the storm in the secure refuge of my snug cabin.

The next day, I watched the snow fall outside my windows, venturing onto my porch when I wanted to add sound to the experience. I could hear the wind rushing through the forest to the east as icy clusters hissed down around my cabin. Though my home was sheltered from the wind’s full force, gusty breaths intermittently teased my treetops and blew the snow into a misty veil. My eyes strained to see the opposite shore of the pond. Sometimes I could just make it out; sometimes it seemed the world beyond my shore had vanished altogether. I had the sense of being in another dimension, a mystical otherworld. Passage back to the ordinary world beyond the pond seemed tenuous, uncertain. But if I had to choose between two worlds, I knew I was exactly where I wanted to be, at least for the moment.

Of course, when living off the grid in the midst of a Maine winter, it’s impossible to linger for long in the realm of the ethereal. My physical needs keep me grounded, demanding that I do the labor to fulfill them. Before the storm began, I worked hard to make sure I had plenty of firewood and water in my cabin to see me through. And the day after, I was out on my snowshoes, packing the trails to the woodshed and pump so I could replenish my supplies. In my next post I’ll take you along with me as I do some of my daily chores (get your boots and fleece tops ready) …

I invite your questions! Is there something you want to know about life in the woods? Do you have a suggestion for a future blog post? If so, I’d love to hear from you! If you receive email notifications of new posts, simply reply to one of them. Otherwise, you may reach me at wendy@wendyweiger.com.