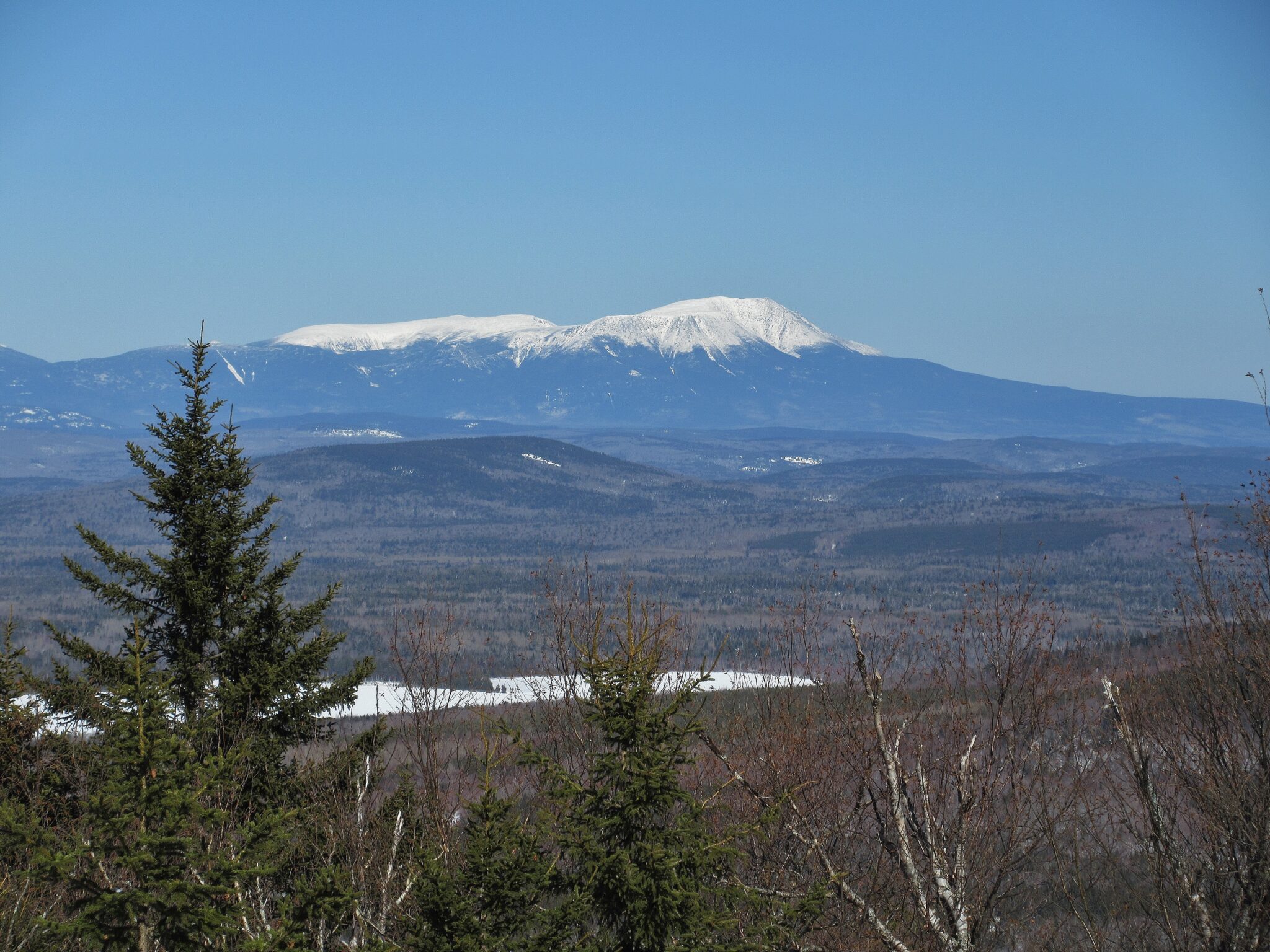 Last week, I wrote about the basic necessities for survival in the woods: fire, shelter, water. I focused on fire, and promised to dive more deeply into the subject of water (pun intended) in a future post.

First, though, I’d like to invite you on a hike, to enjoy some fresh air and new scenery. On this virtual hike, I can assure you all will go well – but I’d like to talk a bit about what I would do, alone in the woods, if something went wrong.

I consider Shaw Mountain to be my “home mountain.” It rises just southeast of my cabin, its highest point about 1,400 feet above my shoreline on First Roach Pond. When I first climbed it ten years ago, there was no trail to the top. Hikers would follow old logging roads to a saddle between Shaw’s main summit and a lesser peak. Then they had to bushwhack the rest of the way up, pushing through scratchy tangles of spruce and fir branches and navigating around fallen trees. Views were mostly obscured by dense woods. In 2017, the Appalachian Mountain Club constructed a trail and cleared trees to reveal dramatic vistas of Katahdin, Maine’s tallest mountain and the northern terminus of the Appalachian Trail. It’s about four miles from my cabin to the main summit via the new trail.

I had long been waiting for a good day to climb Shaw. March 8 seemed perfect: sunny, with little wind, and afternoon summit temperature reaching into the twenties. I strapped on my snowshoes, grabbed my daypack and trekking poles, and started out from my cabin mid-morning.

As I ascended a discontinued logging road up the mountainside, I paused and turned to look back across the white expanse of First Roach Pond. Whenever I climb a mountain, I enjoy identifying other peaks I’ve summited in the past. Beyond First Roach, I could see Mount Kineo, which rises above Moosehead Lake, and Boundary Bald, near the Canadian border. I’ve climbed Kineo many times in both summer and winter, Boundary Bald just once so far.

I turned off the road and headed up the new Appalachian Mountain Club trail. Though I had Shaw to myself all day, the path was partially broken by past hikers. I followed their tracks to a view of Katahdin – “Greatest Mountain” in the Penobscot language – looming in the northeast. Winter’s snows highlight the anatomy of the Katahdin massif. My eyes traced its features, each one recalling past adventures: Baxter Peak, South Peak, the Tableland, the Abol Slide, the Saddle, Hamlin Peak, the Northwest Plateau.

I returned to the trail, expecting to follow previous hikers’ tracks all the way to Shaw’s main summit. But what had these hikers been doing? It appeared they had been weaving haphazardly back and forth across the path. And what had happened to their snowshoes? They were sinking awfully deep into the snow. I took a closer look. The only recent “hikers” past the viewpoint had been moose, not humans! I laughed to myself, and shifted my focus to the trail markers to guide my onward progress.

A bit farther along, I spotted a large depression in the snow where a moose had lain down to rest. Near its bed, I could see its tracks and a cavity in the snow where it had urinated. I’d noticed on past hikes that Shaw Mountain seems to be popular with moose, and had wondered what the attraction was. Moose are definitely not recreational hikers. Their full-time job – when they’re not involved with mating or, in the case of cows, caring for young — is to find enough food to stay alive, a task that’s especially challenging in winter.

Does Shaw offer high-quality winter food? I’m no expert, but I’ve seen a lot of hobblebush (Viburnum lantanoides) on Shaw, and the shrubs have shown signs of heavy browsing by moose or deer. The leaf and flower buds of hobblebush remain “naked” through the winter, when other buds are covered by protective scales. I’m guessing that a moose, longing for summer’s fresh aquatic greens, might consider hobblebush buds a winter delicacy.

I plowed onward to the summit. There, I looked for a semi-hidden artifact that predates the new trail: a small mason jar, tied to the trunk of a spruce at about eye level. It was intended as a watertight container in which “peak baggers” could leave their names on slips of paper to record their achievement. A friend spotted the jar on a shared bushwhack nine years ago, and we added our names to a few others inside. In recent years, the lid has looked so rusty and fragile that I’ve hesitated to touch it at all, for fear of destroying it.

My initial search was unsuccessful. Then it occurred to me that I was standing on accumulated snow, and the jar would likely be well below the level of my eyes. At last I found it, just knee-high above the surface. A rough calculation suggests the snow beneath my feet was about three and a half feet deep.

As I began my descent, I stopped at a clearing just below the summit for another perspective on Katahdin. But what interested me more were large rounded tracks traversing the snow. Most were indistinct, the animal’s feet having sunk an inch or two below the crust. But one, shown below, was remarkably clear, with an imprint of four toes measuring a total of four inches across: the paw of a Canada lynx. I’m always excited to find evidence of these elusive creatures.

As I hiked downward to First Roach Pond, my nose detected something I hadn’t smelled for over two months: occasional woodsy, musty scents of living earth and trees, whiffs of the coming spring. During my hours on the cooler mountaintop, the afternoon sun must have caused a bit of thawing down below.

I got home shortly after sunset. We’ve gained nearly three hours of daylight since the Winter Solstice. The longer light gave me the gift of this leisurely day of exploration.

But what if I hadn’t made it back home? What if I had sprained an ankle, or lost my way, and was forced to spend the night in the woods?

There are several safety precautions I routinely follow when hiking. I carry a map and compass and am well-trained in their use. I carry a reasonably good first aid kit, a headlamp and extra batteries. I let a trusted friend know where I’m going, and she will notify the county sheriff’s office if I fail to check in by a specified time. Recently, I’ve added an extra level of security: a GPS tracking device that I can use to summon first responders. I may go into more detail about all of these in a later post. For now, I’ll focus on the basics of fire and shelter.

We warm-blooded creatures are frail, designed to live in a relatively narrow range of temperatures. In the Maine Woods, in any season of the year, fire can mean the difference between life and death if we spend an unexpected night outdoors. And so, even in summer, I always carry my fire kit in my daypack. My kit provides multiple, redundant means to ignite natural materials, such as fallen cones and dead wood, that will always be readily available.

Here’s a guide to the items in my fire kit:

CAUTION: Know the regulations pertaining to fires in the area where you will be hiking! In many areas, fires are allowed only in official fire rings at designated campsites. A permit may be required for fires, or fires may be forbidden altogether. In a true life-or-death emergency, an exception might be considered, but these rules should NEVER be violated for mere comfort or convenience. In all my adventures in the Maine Woods, I have never been in a situation where there was any need whatsoever to kindle a fire outside of an official fire ring or in violation of any regulation. And if you build a fire, be sure it is thoroughly extinguished by dousing it with water before you leave the area.

The Leave No Trace Center for Outdoor Ethics provides guidance on appropriate campsite selection and how to minimize campfire impacts: https://lnt.org/why/7-principles/.

After building a fire, I could easily assemble a simple shelter, using a few items I routinely carry in my daypack.

Here’s a guide to the items I would use for shelter:

After fire and shelter, the next essential for survival is water. In winter, water is almost everywhere, in the form of snow. I’ve started carrying my water in a metal flask. I have to admit I made the switch from a plastic bottle primarily because my seasonal employer, the Appalachian Trail Conservancy, provided me with an attractive container emblazoned with the ATC logo. However, it’s occurred to me that I could fill the metal flask with snow and set it close to my fire to get liquid drinking water. With plastic, I would have to place the cold bottle next to my body and use my own precious heat to melt the snow.

And so, with what I carry in my daypack, along with what I could easily find in the woods around me, my three basic needs would be met: fire, shelter, and water. I’ve spent a February night alone in the woods of New Hampshire, with no tent or sleeping bag, as part of a survival course, so I know from experience that this minimalist setup isn’t exactly comfortable. But it would keep me alive overnight so I could resume walking in the morning, or it could sustain me for the hours it would take first responders (called by my friend, after I missed our scheduled check-in, or through my GPS device) to arrive.

Until we (virtually) meet again, stay safe out there …

News flash! On March 7, an article about my winter appeared in the Portland Press Herald. For those of you who haven’t seen it yet, it’s available at: https://www.pressherald.com/2021/03/07/spending-the-winter-in-an-off-the-grid-cabin-in-the-maine-woods/.