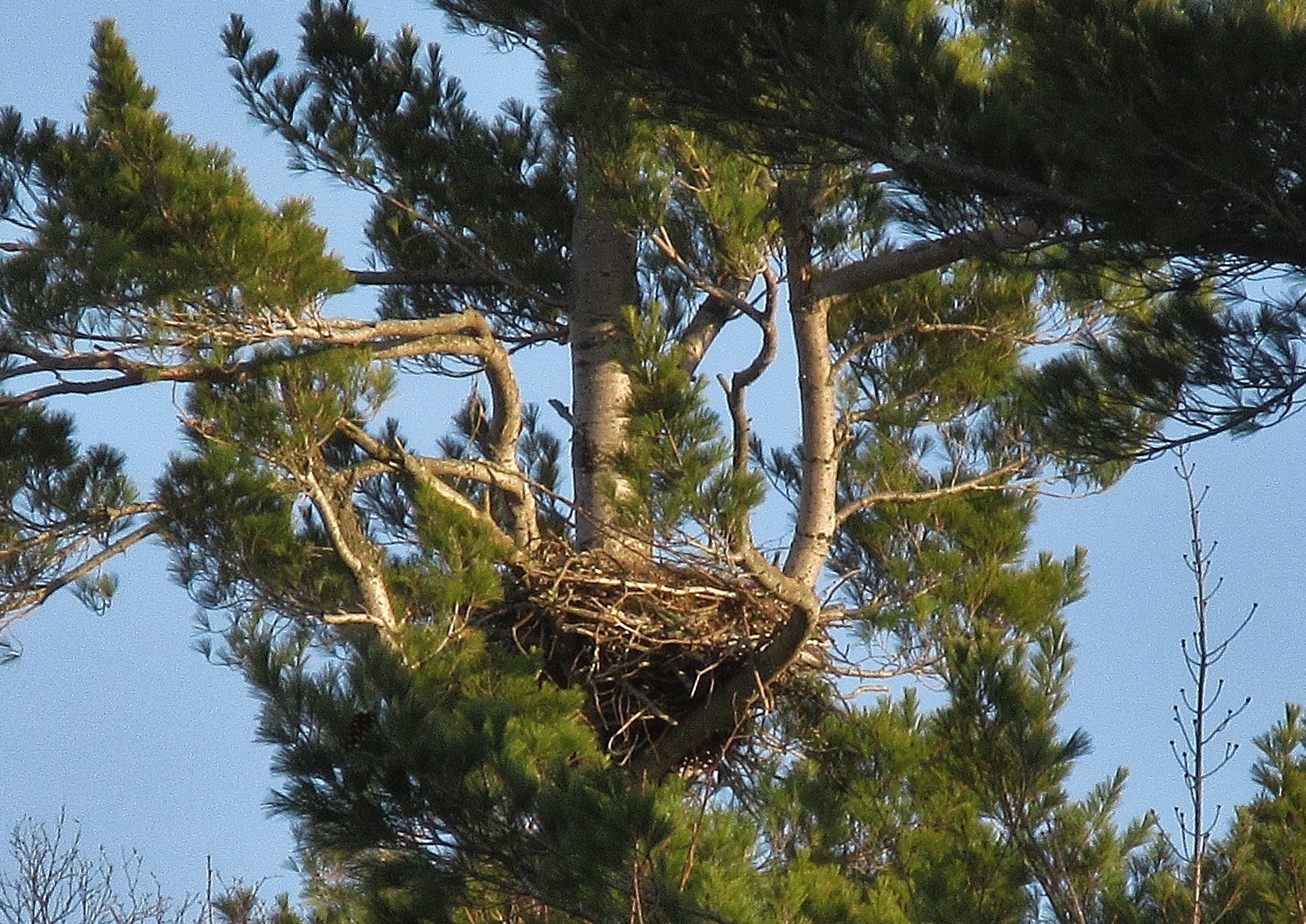 If you’ve been following my blog, you may recall my excitement on April 9. I saw an adult bald eagle at a nest in a tall pine on the North Inlet of First Roach Pond, about four tenths of a mile from my cabin (https://www.wendyweiger.com/north-woods-news-flash-the-eagle-has-landed/). I’ve been watching the nest since 2014. Eaglets fledged from the nest in 2015, 2016, and 2017, but the nest remained empty for three years after that. Would there be another eaglet (or two) this year?

I’ve been back to the nest many times since, looking and listening for signs of activity. By early June, I was convinced the nest was once again a home. I continued to see an adult flying and perching nearby.

Later that month, I noticed small patches of white droppings scattered on the ground near the nest tree, hinting at the presence of a chick within. In mid-July, I found grayish chunks below the tree. After a bit of online research, I realized these were casts, indigestible material that eagles regurgitate.

And then, on July 28, I caught my first glimpse of the resident eaglet, perching on a branch close to the nest! Its head was dark brown, with an outsized beak; its breast was mottled, with a mix of brown and whitish feathers.

In August, I eagerly awaited my first view of the eaglet in flight. On the twelfth, I stood in the water of the North Inlet—little fish nibbling at my legs—for what seemed like quite a while, my eyes fixed on the pine above. The eaglet perched on the edge of the nest, uttering cries that brought to mind a weak version of a gull’s calls. (As I’ve mentioned before, eagles’ vocalizations sound surprisingly wimpy.) On the twenty-fourth, I once again waited in the water, hoping in vain to see a takeoff. As I waded back to shore, an unexpected sound drew my eyes upward. The eaglet was airborne! The sound may have signified a somewhat awkward launch. Was the eaglet pushing hard against the edge of the nest to lift off? Or perhaps it brushed against a tree branch as it flew?

Yesterday, August 31, I walked through the woods to find the eaglet perched on a branch above the nest. The eaglet voiced a series of harsh, high-pitched chirps, then took off gracefully. I waited a while near the nest tree. From time to time I heard the eaglet chirping, sometimes closer to the nest, sometimes farther away. It seemed the eaglet was exploring its parents’ territory. In a few weeks, the eaglet will be ready to leave the nesting territory altogether, and head off on his or her own.

And summer will be over – like the eaglet, it has flown.

Greenville and Monson area friends: Please join me in Monson at 7 PM on September 7 for my multimedia presentation “Heaven Beneath Our Feet: Mindful Exploration of the Maine Woods.” I’ll talk about my adventures in the wild and share simple practices that will enhance your own experience of the natural world. We’ll gather in the Moore Building at 3 Tenney Hill Road (Monson’s main street), next to the Post Office. Here’s a link to the Facebook event: https://www.facebook.com/events/3564098073693874/.

My book Living Every Season: A Mindful Year in the Maine Woods is available for online ordering! Take a look: https://www.wendyweiger.com/photo-book/. It’s also for sale at several locations in Greenville, Maine: Northwoods Outfitters, the Corner Shop, and Indian Hill Trading Post. In Monson, you’ll find it at the General Store.