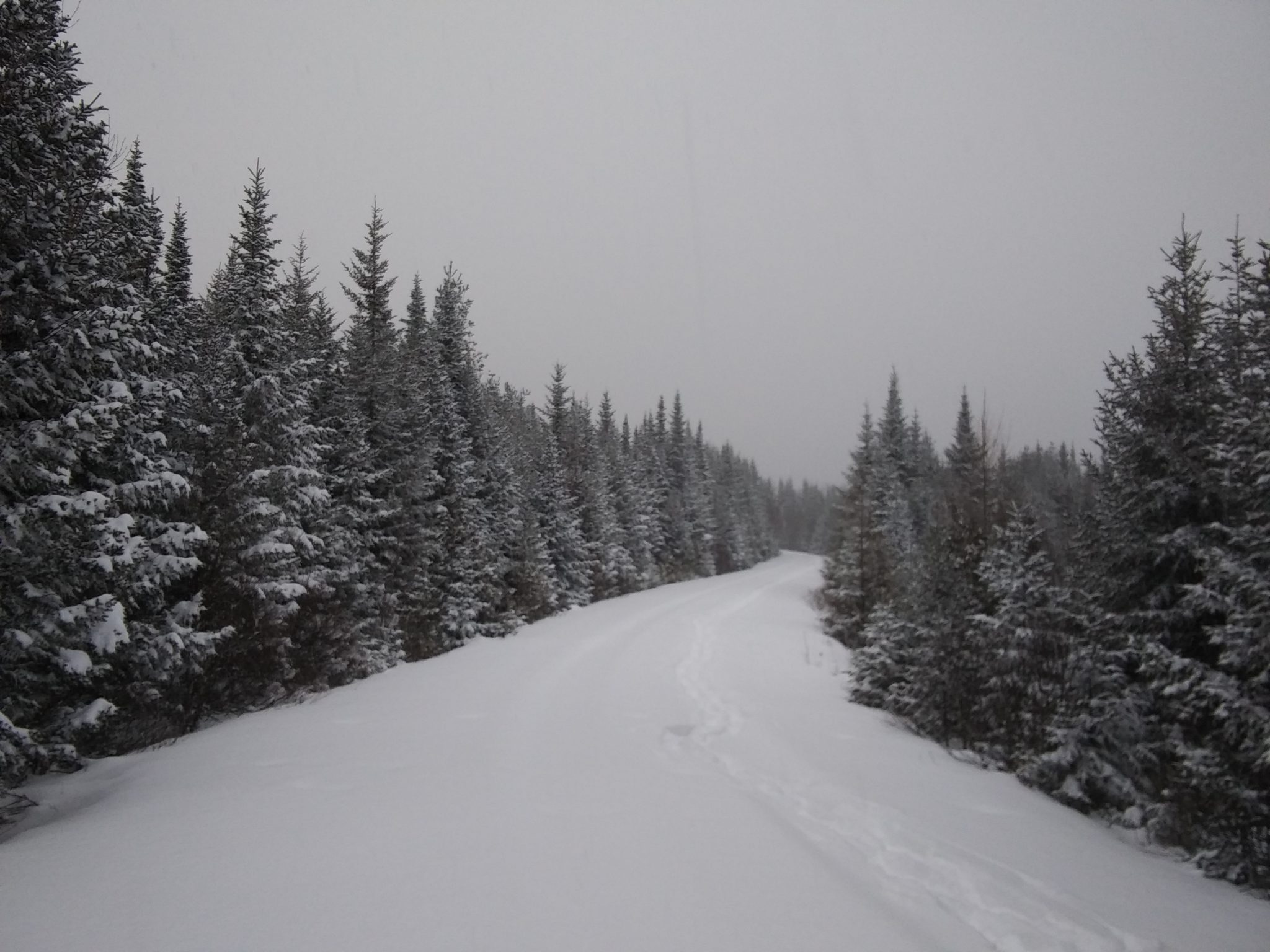 My last post was on the Winter Solstice, December 21. That afternoon and evening, I monitored the evolving prediction for a snowstorm the following day. I realized this would be the storm that closed the unplowed gravel roads leading to my cabin for the winter. I would need to get my Subaru out to a safe parking spot on a plowed road and snowshoe back in.

Initially, I thought I would head to Greenville, the nearest town, about 30 miles distant, to do errands. Then, on my return, I could park on the Frenchtown Road, which is plowed, and hike the remaining 4.6 miles back to my cabin. However, it became increasingly clear that driving all the way to Greenville would be a messy, slippery experience. I adjusted my goals accordingly, and reduced my errand list to a quick trash run to the Lily Bay Transfer Station—my last opportunity for easy disposal until spring.

My errand accomplished, I left my Subaru in its temporary home along the Frenchtown Road and walked into what felt like an old-fashioned snow globe. The flakes fell thickly as I broke trail through an ever-deepening white blanket. By the time I reached my cabin, the total depth from the current and previous storm was about 10 inches; another inch or so fell by sunset.

On the 23rd, I headed out again to spend the Christmas holiday with friends in Greenville. This time, I was pulling my gear sled behind me. The load was not terribly heavy—I had taken some of what I would need the day before, loading it in my vehicle—but the sled took considerable effort to pull nonetheless. My tracks from the previous day had largely filled in. I broke trail for well over 4 miles, some of it uphill, before reaching a section packed by the winter’s first snowmobilers.

When I set out, the temperature at my cabin was about 15 degrees Fahrenheit; by the time I reached my car, it had fallen to 5 degrees. This is a temperature range that’s generally comfortable for me when I’m exercising in the woods, and the trees bordering my path sheltered me from wind chill. But I depend on vigorous exertion to keep me warm, and as the temperature dropped into the single digits, I found that my slow pace with the sled was not generating as much body heat as I would have liked. I was averaging 80 minutes per mile, as compared to 40 per mile the previous day, with less snow and no sled.

As I monitored my physical condition—hypothermia is always a risk in winter—I knew that I could hide the sled in the woods and complete the trek to my car at a quicker pace, returning the next day to pull it the rest of the way. In the end, I was able to complete the trip as planned, but the experience was a start-of-season reminder that winter travel on foot is always a complex negotiation involving temperature, wind chill, snow conditions, elevation gain, and the load being carried or pulled.

My return trek on the 29th was less challenging, despite a heavier load on my sled, including bags of clean laundry and fresh food supplies. I was able to park at Medawisla, the Appalachian Mountain Club’s lodge on Second Roach Pond. According to a map I picked up at the lodge, I pulled the sled 2.7 miles from the trailhead to my cabin. The temperature was in the low twenties, and much of my way was packed by holiday snowmobilers. I took advantage of the easier conditions to record a video explaining the intricacies of my traveling rig: https://www.youtube.com/watch?v=nthBcz7yr7k.

The roads will likely reopen in late April or early May. Until then, I anticipate leaving the woods about once a month to pick up supplies and mail, dispose of trash, and do laundry (I do some by hand in my cabin, but without running water, my capacity is limited). I look forward to sharing my winter life with you! 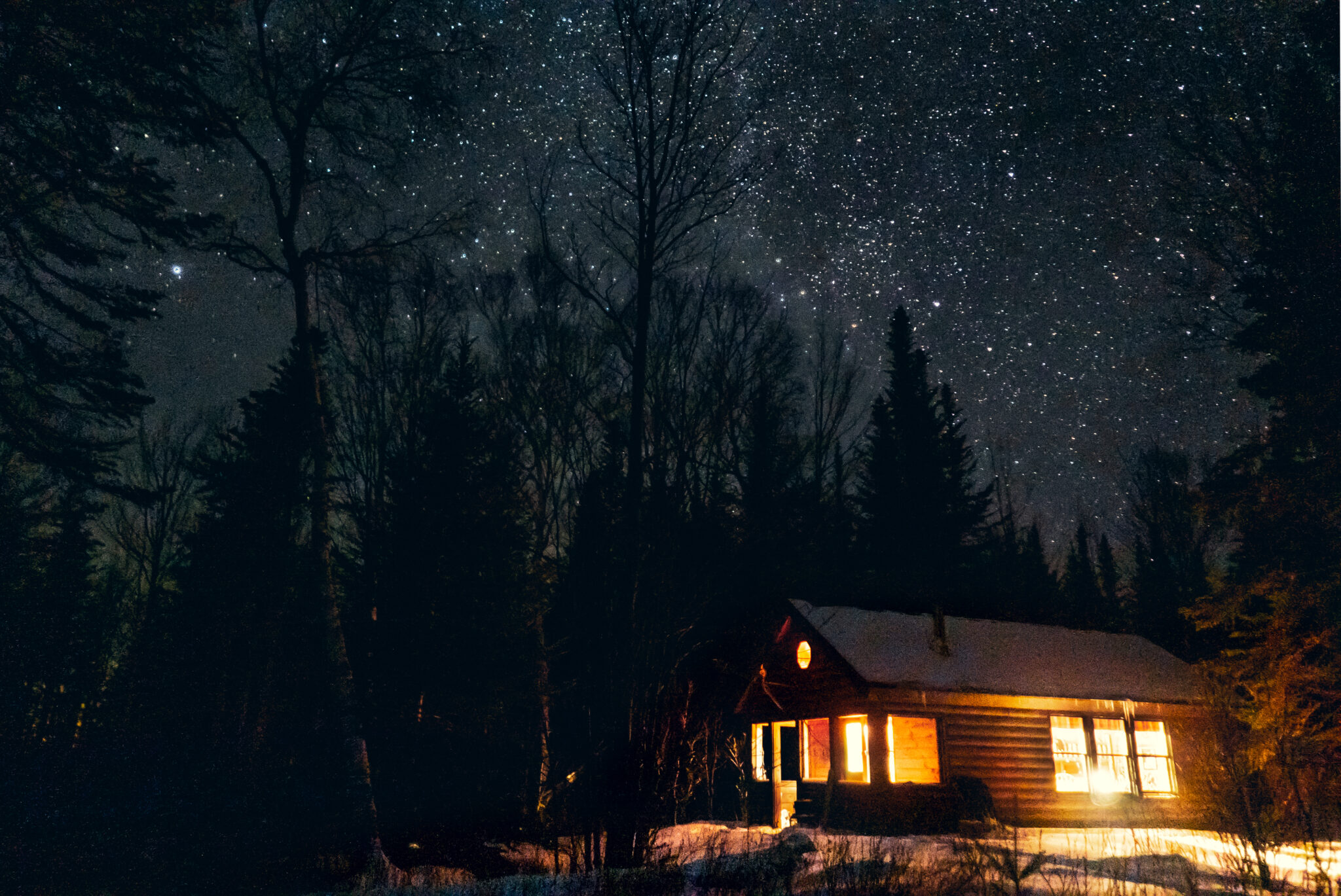