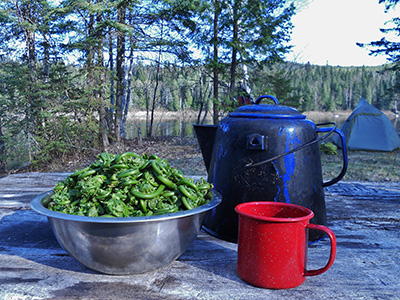 In spring, ferns of various species emerge from the forest floor as tightly coiled “fiddleheads” (so called because they resemble the scroll at the top of a violin). The fiddleheads of the ostrich fern are edible. They have a nutty, earthy flavor, and are considered a delicacy by many New Englanders. They may be enjoyed steamed or boiled, made into soup or pickled. A friend of Mother’s shared this soup recipe with us. (A note of caution: Consumption of raw or lightly-cooked fiddleheads has been associated with gastrointestinal illness. The Maine Center for Disease Control recommends washing fiddleheads thoroughly and cooking them by boiling for 10 minutes or steaming for 20 minutes.)

Take 1/2 cup chopped onion and 3/4 cup chopped celery and sauté in 1/4 pound butter. Mix in 1/3 cup flour. Add 1 cup chicken broth (low-sodium if preferred), 2 cups chopped fiddleheads (you may want to leave about 1/3 of the fiddleheads whole to add visual appeal and texture), 1/2 cup heavy cream (or 1/4 cup heavy cream and 1/4 cup milk, if you prefer), 1/4 tsp salt and 1/2 tsp pepper. Be sure to boil the soup for at least 10 minutes to ensure that the fiddleheads are safe for consumption. Thin with milk if the soup is too thick for your taste. This recipe can be doubled or tripled if desired.