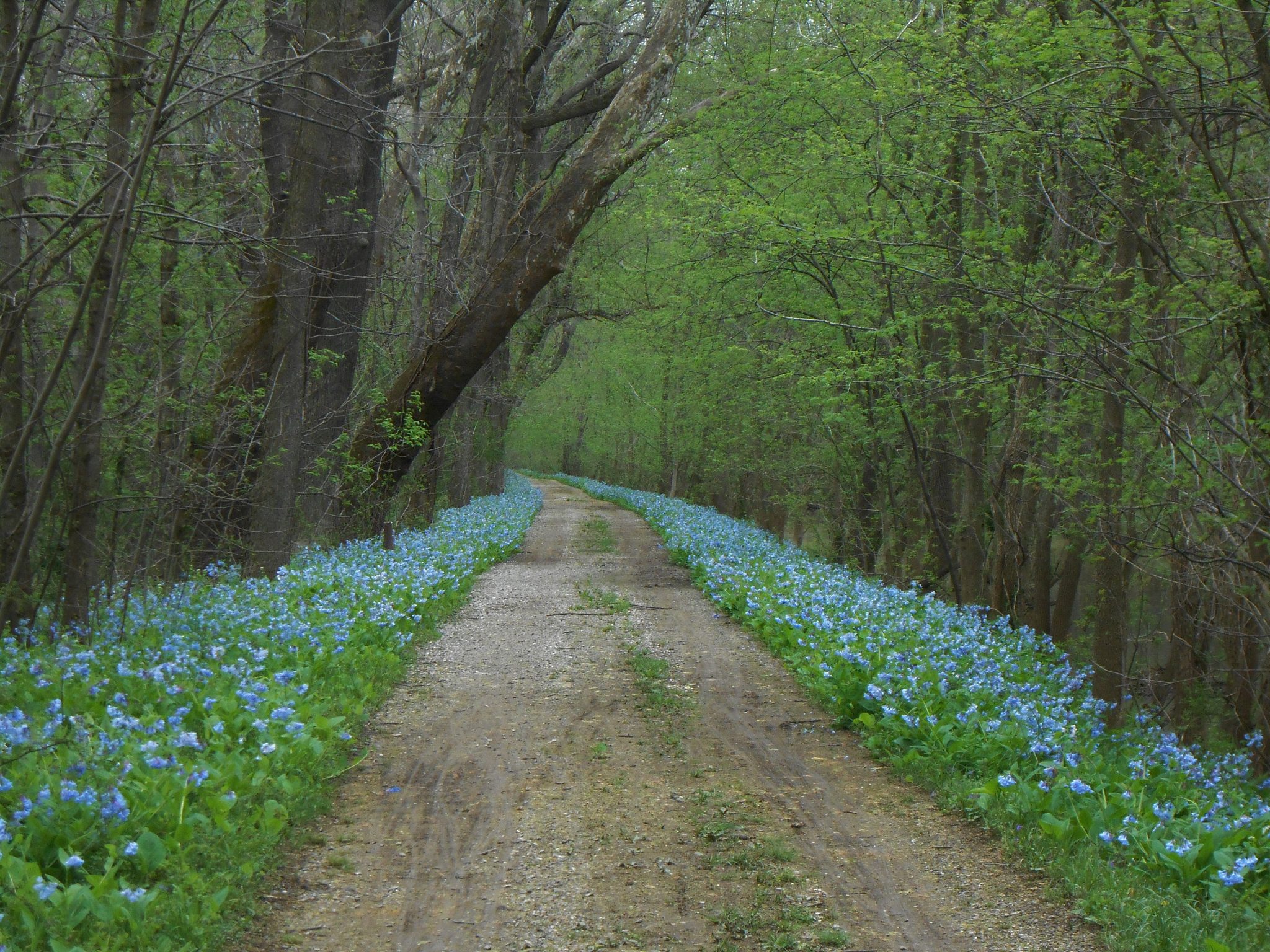 I’ve spent six days hiking the C & O Canal towpath. The canal starts in Georgetown, a neighborhood in Washington, DC. It parallels the Potomac River along the western border of Maryland to Cumberland, nearly 185 miles in all. I began walking at mile marker 5 – on the Maryland side of the MD/DC line – and continued on to Harpers Ferry, West Virginia, just across the Potomac from the towpath near mile 60. On this stretch, I pushed my gear in my new cart, so as to keep the weight of my pack off my newly-recovered knees.

There were signs of spring everywhere. The redbud trees and bluebells were especially beautiful.

And in my tent, I heard the “music of the night”: the chorusing of peepers, the buzzy songs of toads, and the calls of barred owls.

I passed the Great Falls of the Potomac on my first day out, and on the fourth day, I walked through a floodplain forest that is home to the largest tree in the state of Maryland, an American sycamore. I didn’t find that specific tree, though I saw several large specimens.

I met some wonderful “trail angels” along the way. 75-year-old Don Baldwin and his friend Jeff Brooks stopped to chat and pumped up my cart tires. Since 1972, Don has logged 331 days and almost 11,000 miles on the towpath, mostly biking but with some hiking and jogging mixed in.

Katharine Brown gave me a lift around a washed-out culvert at Little Catoctin Creek, dropping me back onto the towpath in the town of Brunswick, a couple of miles farther along. We talked at some length. She told me that she is struggling with depression but tries to find something meaningful to do each day. She said she believes God has a purpose for everyone. I was grateful for her words. I’ve been wrestling lately with some inner issues. Some relate to delayed grieving for the loss of my mother five years ago. Others are associated with my father’s violent suicide when I was twenty, which left me with post-traumatic stress disorder. I hugged Katharine and told her she should consider her day a success, because she had certainly helped me. My comment brought tears to her eyes.

Yet another “angel” appeared at the spot where the Appalachian Trail joins the American Discovery Trail, a mile and a half from the bridge over the Potomac to Harpers Ferry. She informed me that a blown-down tree would block passage of my cart, but that she would accompany me to help me lift the cart over. She also offered to help me get the cart up the stairs to the bridge. When we reached the stairs, I paid her good deed forward. I noticed a dog who had slipped free of his collar, which was sitting empty at the end of a lead that was tied to a post. I coaxed the dog toward the collar and managed to get him back into it. As it turned out, the dog’s owner was coming down the stairs from the bridge as my “angel” and I were heading up, and the owner lent a hand with the cart as well.

I’ve spent the past few days in Harpers Ferry, site of John Brown’s infamous raid in 1859. I’ve visited the headquarters of the Appalachian Trail Conservancy – as many of you probably know, I work seasonally for the ATC in Maine. I’ve also been preparing for a talk and mindful nature walk I’ll offer tomorrow (Easter Sunday) evening at a local pub known as “The Barn.” The next morning I’ll be back on the trail, heading toward Cumberland. To those of you who observe Easter or Passover, I wish you joyful celebration!